After the Fox Business Network/WSJ debate, how do the candidates stack up according to Republican primary voters in South Carolina? 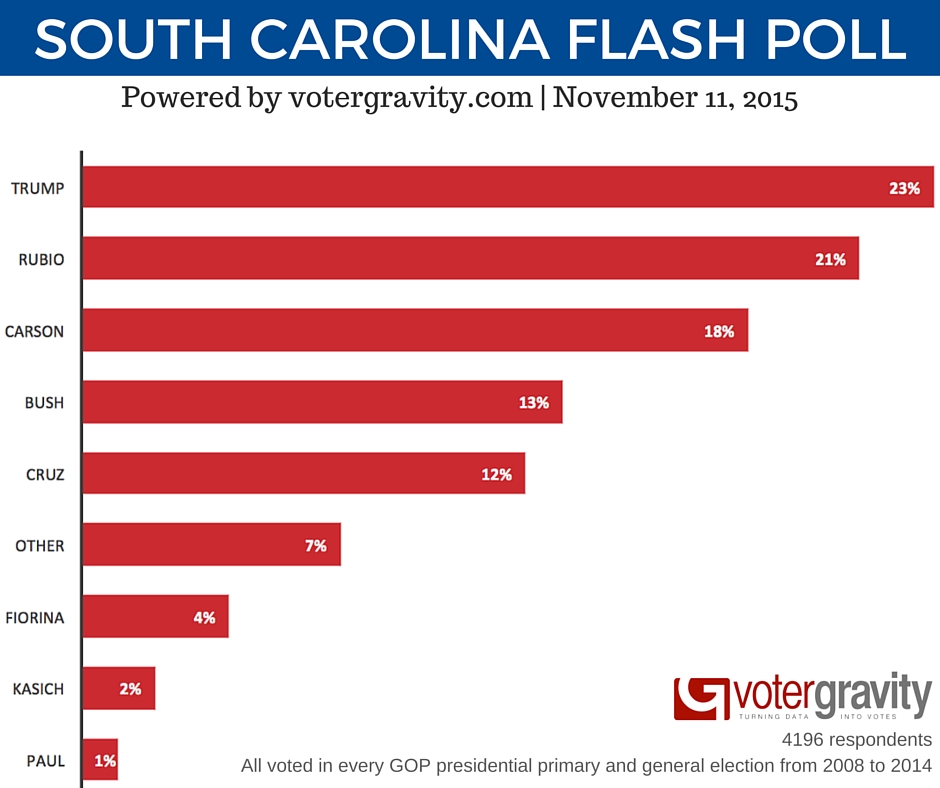 Who were the respondents in this flash poll? Consistent with our incredibly homogenous groups of Republican super voters in previous polls, all 4,196 respondents in this week’s flash poll have voted in every GOP primary, GOP presidential primary and general election from 2008 through 2014. Our ongoing goal with these statewide polls is to take the pulse of voters who consistently vote in Republican primaries.

And what does this poll tell us about the trends of support from Republican primary voters?

Trump and Carson remain strong. But just as many pundits suspected, Rubio is the man on move and looks better than ever with 21% of the GOP base in South Carolina supporting him. That’s just two points behind frontrunner Trump.

Carly Fiorina showed potential in polls just weeks ago, but this flash poll is consistent with national trends indicating that potential went unfulfilled securing only 4% with South Carolina Republican primary voters in this post-debate snapshot.

The media has been incredibly harsh writing about his fall from prominence. According to the 13% support given by Republican primary voters in SC, he is most definitely not dead. In fact, that’s just 5% behind the top 3 candidates (Trump, Rubio and Carson), so it’s clear the base hasn’t written him off just yet.

One of the more interesting trends in the all the polls we’ve conducted of Republican primary voters around the U.S. is that of Ted Cruz. In no poll we have conducted this year has Cruz broken single digit support, but in South Carolina he earned support from 12% of our respondents. Time will tell if he has found a way to expand the extremely loyal foundation of supporters that have been carrying him. Is this the beginning of a new trend? We shall see.

John Kasich and Rand Paul bring up the rear of the Fox Business/WSJ debate participants as neither earned more than 2% support with South Carolina Republican primary voters.

Paul has definitely received some positive feedback from the younger and more libertarian parts of the Republican base after his debate performance, and we willingly admit that group does not show up in a poll focusing on Republican vote history from 2008.  But (you knew a “but” was coming) that young group does not make up a majority of voters in Republican primaries, and earning just 1% support amongst the dominant demographic he needs to win a GOP primary is not a sustainable trend.

Kasich, who pundits crushed for his terrible debate performance, has only showed potential in a single state: New Hampshire. But even in New Hampshire where his Super PAC has spent millions to help his numbers, favorability is dropping, and he shows no upward trend in any national or state poll. The GOP primary voters in this South Carolina poll are no different. If this trend continues, expect to see him bumped from the prime time debates very soon.

If you would like to take the pulse of voters in your area, sign up for a free web demo of Voter Gravity today.