Automatically Created Walklists – Near Me

Listening to client requests through primary elections, we have re-introduced a feature we call “Near Me.” This feature allows clients to pre-set targeting criteria, and when users log into their phones – target voters appear on their phone closest to wherever they are located at that moment.

This feature is best for campaigns who want to take a more hands-off approach to door to door efforts and trust their block walkers. Walkers can simply go to any neighborhood in district, and be insured that they are speaking with target voters who have not been previously contacted by the campaign.

Some tips for clients interested in using this feature.

Administrators
1. Setting target criteria: from your menu, go to Manage > Near Me Settings and simply add the criteria for your target voter for anyone using the “Near Me” feature.
2. Once saved, the “Near Me” feature will always display voters who meet that criteria, but have never been contacted by the campaign. This prevents duplication of effort with any existing call or walk efforts. 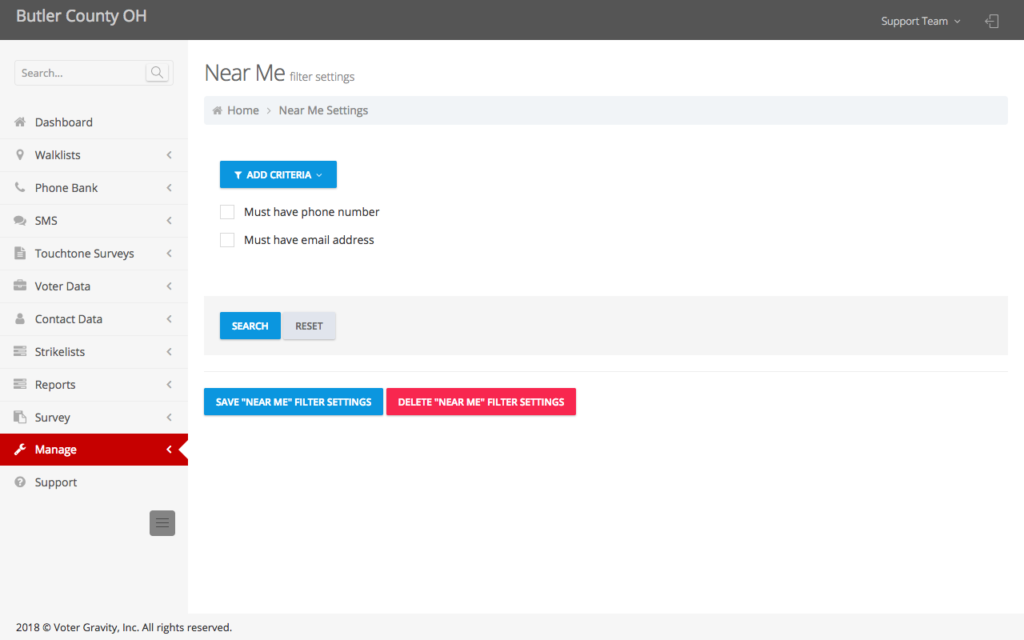 Block Walkers
1. Log into your account on the phone and permit the site to access your location.
2. Once logged in, simply click on the button that says “Voters Near Me.” Target voters will appear on your map, and you can just go to the house closest to your location.
3. Periodically, your list will update to show voters who are closest to your new location while removing those from the map to which you have already spoken.
4. While somewhere near a 100 voters initially appears, the voters will continue to appear on screen as long as you want to continue walking. 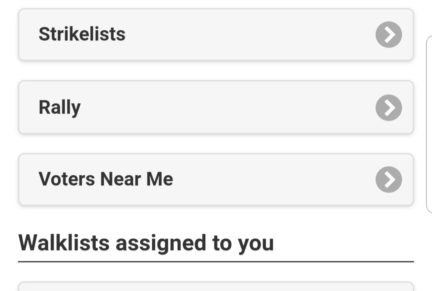 feature near me New Features walklist

In a digital age, your campaign must have a strong online presence—and that means more than just an email account and website.

By using Facebook, President Obama was able to connect with voters during the 2012 election cycle, in swing states who lacked listed phone numbers. According a survey released in 2012, 22 percent of registered voters used a social media site —such as Facebook or Twitter—to let others know how they voted. 30% reported that they were encouraged to vote for either President Obama or Governor Romney by friends and family on a social networking site, and 20 percent used a social networking site to encourage others to vote.

These numbers are even higher when we look exclusively at younger voters. Among voters under the age of 30, these percentages were 45 percent, 29 percent, and 34 percent, respectively.

Clearly, average voters are using online social networks to influence their friends and family on political matters. Facebook even has the option for you to let people know that you voted—and you can even pick who you voted for.

In 2006, it was found that Democrats were more likely to engage in campaigning online than Republicans were. This edge over the Republicans only became stronger during the 2008 election. Interestingly enough, Republican congressional candidates were found to have a stronger presence on Youtube than Democrats.

Before the Iowa caucuses in 2008, a study found that nearly 48 percent of students and young people received their news from a social media site, which it’s not hard to figure out that they would use social media to gather information on political candidates.

The idea that a well managed social media campaign can turn out a high volume vote can’t be dismissed due to the fact that individuals who saw that their friends voted/who they voted for were actually more likely to vote.

According to Facebook, the candidates who were most successful on Facebook, won their races. Following the 2010 congressional elections, Facebook claimed that in 74 percent of House races, the candidates with the most Facebook “fans” won their races. This was also true of 81 percent of Senate candidates. With that being said, however, we should be more skeptical of data and results received from social media than say, gallup.

Use your social media accounts to build name recognition, get your message out there and turn out the vote to win! Find out more by downloading Social Politics: The Impact of Social Networking on Political Campaigns:

Does Direct Mail Still Matter for Your Campaign?

What you might find surprising is that, while technology is critical, direct mail is often the largest source for campaign fundraising.

After Barry Goldwater lost to Lyndon Johnson in 1964, Richard Viguerie went to the county clerk’s office and received a list of the individuals that gave $50 or more to Goldwater’s campaign. He then wrote to those people, asking them to contribute to conservative causes. Thanks to this effort, the National Rifle Association, The Conservative Caucus, the National Right to Work Legal Defense Foundation, Human Events, and several dozen others were founded.

Studies show that for every 200 pieces of nonpartisan, issue-based mail, you will see an additional one voter turnout in the election, yet partisan or party affiliated mail don’t turn out a single extra voter.

Studies have also shown that if you list the voting records of significant others or even neighbors, then voter turnout will be even higher due to the fact that it uses social pressure to turn out votes.

While partisan mailings with negative messaging drive down voter turnout rates, you can use positive mailings to your advantage. For example,  you can release mailings stating your positions in a positive light  before your opponent does so in a negative one.

The effectiveness of a direct mail campaign can be directly related to just how accurate their mailing list is. Chances are that your information will be sold to other conservative, like-minded organizations hoping that you will donate to them. While it has been proven that direct mailings might not have an effect on turning out voters, it can help persuade undecided voters.

The Stats: Why The Ground Game is Key to Winning

The Stats: Why The Ground Game is Key to Winning

One of the most effective ways of getting your name out there and turning out voters is through face-to-face neighborhood canvassing. While it is much more tedious than phone banking, putting in the extra work of canvassing can make all the difference in your campaign.

END_OF_DOCUMENT_TOKEN_TO_BE_REPLACED

In our continuing mission to provide clients with relevant, up-to-date information concerning political campaigns, Voter Gravity is pleased to release a new resource page which will continue to help us, help you. The first content we have made available are four white papers by Dr. George Hawley, assistant professor of political science at the University of Alabama. Furthermore, we have made these resources available FOR FREE!

END_OF_DOCUMENT_TOKEN_TO_BE_REPLACED

We were excited to meet and talk with each conservative who took the time to learn the latest in political training at the 2016 CPAC Activism Boot Camp. As you walked into the Activism Boot Camp, one of our volunteers handed you a series of guides describing how you can train to win in your local communities. We want to make sure that you receive an electronic copy of these flyers to share with family and friends: END_OF_DOCUMENT_TOKEN_TO_BE_REPLACED

Voter Gravity will be at CPAC, will you?

Voter Gravity’s Ned Ryun, Chris Littleton, and Aubrey Blankenship are set to speak at the CPAC Activism Boot Camp March 2-4 on campaign technology, GOTV, and digital activism. If you’re attending CPAC, the boot camp is included in your conference pass.

This year’s CPAC Activism Boot Camp is set to build on last year’s talks. Featuring the best speakers in the industry, each day will bring a slew of engaging topics to get you prepared for campaign season. Candidates, campaign staff, and campaign volunteers will find valuable training tailored to fit their prospective roles in modern campaigns.

END_OF_DOCUMENT_TOKEN_TO_BE_REPLACED

The Voter Gravity platform prides itself in a user-friendly interface and navigation. The newest adjustments to the look and feel only further emphasize our efforts to continually improve the system based on feedback and the needs of users. That said, here’s a quick insider’s campaign hack you may not have realized was available to make your list preparations even easier.

While we provide many options for developing your target audience, whether for door-to-door efforts or phonebanking, it’s possible that from among selections of election histories, party affiliations, and other options you may find yourself wanting to reuse that same criteria over and over again. Rather than choosing from each individual field every time you load a new precinct to pare down which voters you wish to contact, you can eliminate those steps by developing a single umbrella tag.

Under the Voter Data menu selection choose Export List. From here, choose from the various options for building a target universe just as you normally would in other areas of the system. Remember, in this screen you don’t have to select geographic parameters if you want to encompass all voters from your account.

After pressing Submit to apply those choices, you can scroll to the bottom of the page and select a tag, using Tag Filtered Voters, to label everyone. This of course requires you to first create that tag but, if you haven’t, it can easily be done under Manage in the menu sidebar and choosing System Tags. 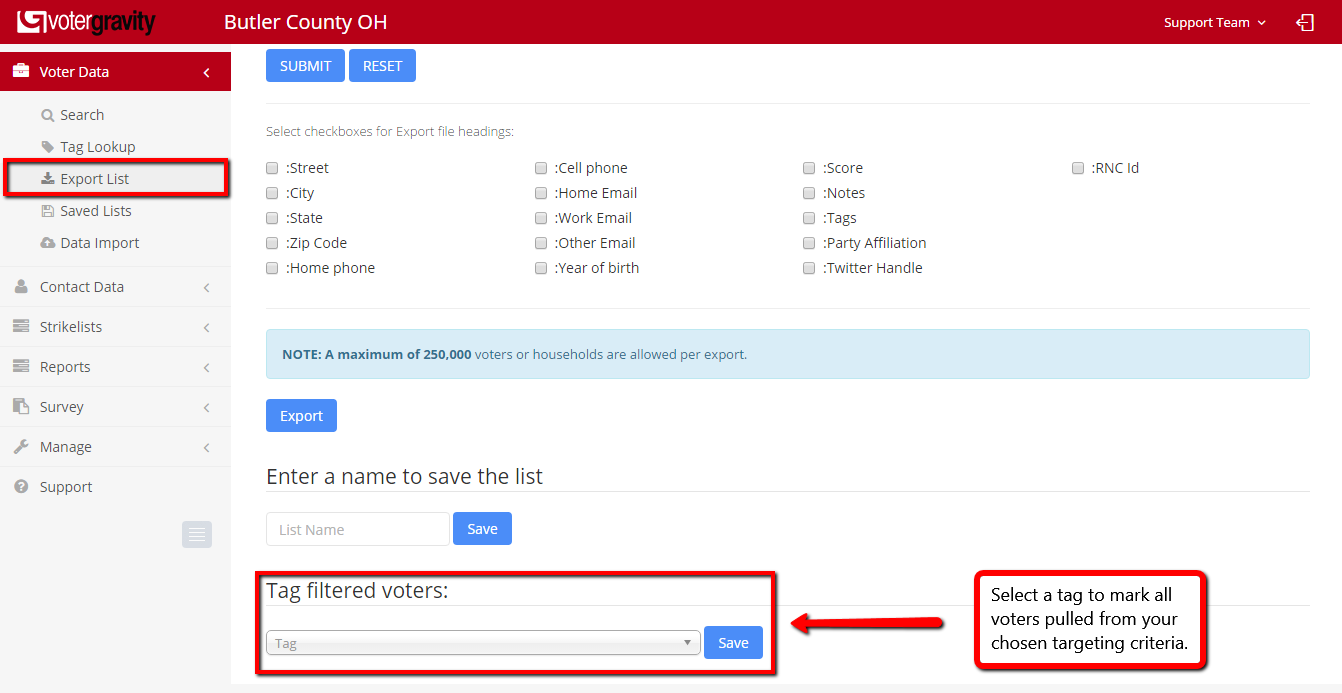 Having completed this process once, you’re set for building your walklists and phonebanking lists by now choosing this new tag as the sole defining criterion. Especially when constructing walklists, working precinct by precinct, establishing this simple model beforehand can save you a lot of time!

We hope this campaign hack will help you maximize every possible moment during your voter contact efforts. If you have any questions or requests for future tips and hacks, please email support@votergravity.com.

Should Political Candidates Campaign During the Holidays?

There is no time like the present. This old adage can apply to political campaigning during one of the busiest times of the year. The decision to campaign during the holidays is, of course, best left to each individual campaign. The type and timing of voter contact will also be a factor.

END_OF_DOCUMENT_TOKEN_TO_BE_REPLACED

Most campaigns struggle with getting their message to their constituents. The hot topics of the day or single issue voters can really derail a campaign’s ability to adequately get their message across without being sidetracked. If this is the case with your campaign, your website, and specifically your campaign blog, needs to become the place where people can get your opinion and views about issues that are important to the office for which you are running. Here are five ways to improve your campaign blog. END_OF_DOCUMENT_TOKEN_TO_BE_REPLACED