Most campaign consultants with the authority to make important decisions have decades of experience in politics. Many are very good at making these decisions, using the knowledge they’ve accumulated over all those years to create high quality strategies for winning elections.

The most valuable of these lessons are learned not from years of successful campaigning, but from years of mistakes. While there are many strategists who have fantastic ideas about properly messaging to and turning out voters, few have the empirical evidence to authoritatively confirm their beliefs.

For example, most consultants have ideas about matching the demographics of their volunteers and the voters to whom they’ll be speaking. Others have strong inklings about different groups of voters and how they’ll respond to different types of mailers (from color choices to language and messaging decisions).

Not enough of these consultants, however, have actually tested these theories in the field. Without a control group of voters with whom the “less efficient” strategies have been tested and shown to be unsuccessful, it is impossible to know for sure whether a certain strategy is best.

After the well-documented success of the 2012 Obama campaign’s use of campaign technology and A/B testing, more and more Republican efforts are beginning to utilize this technique. Despite its unquestionably rational credentials, however, the decision to dedicate a political outfit’s strategy formation to this more scientific methodology is rarely an easy one to make. There are two main reasons for this.

First, it is not often in the individual best interest (especially short-term) of a political consultant to discover that some (or even most) of his or her ideas could be wrong. For example, when a campaign identifies 5,000 supporters for a local election, and the candidate then gets 10,000 votes, the consultant will benefit from the assumption that basically every one of those 5,000 tagged supporters showed up on election day.

Looking back on the campaign with an analysis of election history data to find out which tagged supporters actually showed up on election day has the potential to teach consultants a significant amount about how to improve their turnout operations. And while even more could be learned from the utilization of A/B GOTV strategy testing in such an analysis (a technique which we highly recommend to everyone), even the simpler process of throwing supporter data up against microtargeted turnout statistics is too rarely seen in today’s Republican consulting climate.

Second, a consultant’s ability to learn new things about campaign strategy starts with a willingness to admit that he or she may have been doing things in a sub-optimal way – in many cases, for a very long time. The longer a strategist has been honing the craft, the more experience they gain. This experience often leads to greater power and responsibility, yet it also frequently serves as an obstacle to open-minded discussion when it comes to learning new things about how best to reach and turn out voters.

To ensure your campaign is utilizing the most efficient strategies possible, always be willing to let go of prior beliefs about how campaigns “should” use data. And never stop looking for new ways to experiment and improve upon everything you’ve learned so far. Discovering that your favorite strategy might not actually work as well as you thought won’t feel great at first, and you can be sure that such feedback is the best way to ensure that your campaign reaches its full potential.

Feeling like you know more about campaigning than your opposition is wonderful.

Winning is even better.

New Feature: Near Me helps activists connect in their community

Imagine a volunteer named Nancy calls on Wednesday morning. Nancy is at home and wants to help the campaign starting immediately. In fact, she wants to go knock on doors. In a traditional campaign, she would have to drive to a campaign headquarters, sign up, get a walk list, and then go to a strange neighborhood and knock on the doors of people she likely does not know.

With the launch of Mobile Near Me, Nancy can be out knocking on doors in her neighborhood within minutes. Here’s how it works:

Once Nancy has been added to a campaign’s account as a volunteer, she can log in to the Voter Gravity mobile app via her smartphone.

After logging in, Nancy can select “Near Me” and Voter Gravity will dynamically create a list of targeted voters close to her location. She’s out the door and talking with neighbors, where she is likely to have relationships with people who will trust her — and be more likely to support her candidate.

But who is a targeted voter? That’s easy, campaigns just select a set of filtered criteria via the portal, just as they would to create a targeted walk list or phone bank.

Request a demo today to check out this new feature and the other innovative voter contact tools available on the Voter Gravity platform.

INBOUND13, Seth Godin, Nate Silver, and How to Stand Out in an “Attention Economy” 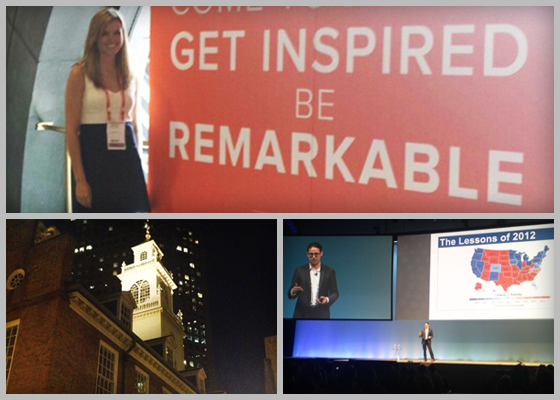 Voter Gravity staff spent a week in August in Boston, connecting with innovators from across the country while attending INBOUND 2013, the world’s largest inbound marketing conference. Interacting with keynotes like social marketer Seth Godin and longtime-leading statistician Nate Silver, we came away with an even stronger sense of why mastering advancing technology is a must for modern political campaigns.

So what does work? Seth Godin defined this digital revolution: “We are leaving the industrial economy and entering the connection economy.” Data reveals that 92 percent of American consumers trust recommendations from family & friends when making a decision. It’s the personal connection.

One of our must-see keynotes was Nate Silver who focused on prediction (of course!) and bringing meaning from a universe of noisy data. Big data becomes useful when we think in terms of actionable knowledge and statistics. Don’t be afraid to test, measure, try and err to determine how data will enable you to establish meaningful connections with your target audience.

Stay tuned for more takeaways on how to use technology to effectively reach your voters over the next few weeks!

The Importance of Live Voter Contact: 1 in 12 people will vote for you

Speaking face-to-face with 12 voters while walking door-to-door results in one vote for your candidate, according to studies analyzing local campaigns done by three Yale professors. This includes those who have never heard of you or your candidate before. Let that sink in: if you speak with 1200 voters, 100 will vote for you. Gerber and Green’s Yale studies reveal that authentic person-to-person contact reaps the best results, and door-to-door canvassing is the most efficient and effective method of voter contact.

Reflective of many local campaigns, this summer’s House of Delegate primaries in our district in Western Loudoun County resulted in a win by a 758-vote lead with just over than 5,100 ballots cast. Every vote counts, especially at the local level. Despite the ever-increasing methods to reach people with your message, campaign victory comes back to the core of politics: people connecting with people. It makes sense that a personal connection will reap results, but what do the statistics say?

We’ve dug into Gerber and Green’s Yale studies and think their findings, considered a bedrock for many recent GOTV studies, reveal helpful statistics to keep in mind:

Gerber and Green conclude that “the more personal the interaction between campaign and potential voter, the more it raises a person’s chances of voting.” Thankfully, data analytics is about personalizing a campaign and campaigns are becoming more adept at establishing meaningful connections with targeted voters.

Campaigns put tremendous energy and effort into knocking on doors and making phone calls in order to turnout voters.

But how many really use voter contact to inform strategic decisions? END_OF_DOCUMENT_TOKEN_TO_BE_REPLACED

Campaigns are changing. Once dominated by blast communications — TV ads, direct mail, and robocalls — the modern campaign is adapt at two-way communications. Canvassing, social media, phone banking, and peer-to-peer engagement are now more important than ever to creating a winning campaign.

The backbone of these new strategies is an effective, motivated, productive grassroots organization. But how does a campaign recruit dozens, hundreds, or even thousands of volunteers willing to give their time to help your cause? Here are six ideas to start building the campaign of the future. END_OF_DOCUMENT_TOKEN_TO_BE_REPLACED