As we enter an era of data driven politics, it’s important to know what really works and what doesn’t in regards to Get-out-the-Vote (GOTV). It is still astounding how much money was spent on robo calls and mail for GOTV in 2012. There were reports that the some campaigns were doing five robo calls a day to the same voter during the last five days of the election.

The good news in regards to where you should spend your time and money for GOTV? Alan Gerber and Donald Green have already done a study for you to let you know what works best. In their 2004 book, which has been updated, they broke down the most effective means for GOTV. (There have been even more recent updates at Yale’s research site on GOTV.) But let’s take a look at some of the techniques, with their cost and effectiveness: 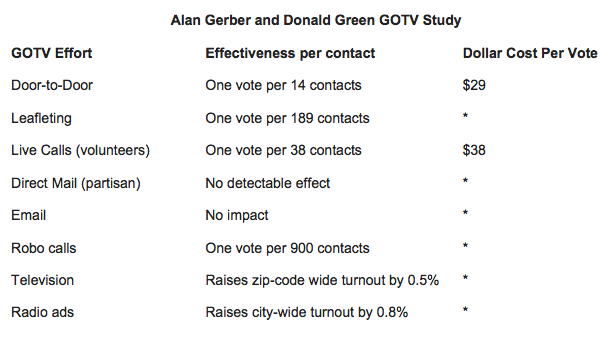 Now the study notes that the * means “Cost effectiveness is not calculated for tactics that are not proven to raise turnout” and that “door-to-door canvassing is talking to targeted voter, for phone calls, talking to targeted voter.” So robo calls, emails, and direct mail have no real impact for GOTV, and it should be noted that television and radio raise turnout by less than a point. That is not even targeted GOTV. It just raises turnout generally, not necessarily among a campaign’s targeted voters.

The study came up with the $29 a vote for door-to-door by calculating $16 an hour and 6 contacts per hour. The live calls were based off $16 an hour and 16 contacts and hour. Imagine if you were able to drive down costs for doors and phones to, say, $10 an hour, and then drive up doors to 10 contacts an hour and calls to 25 contacts an hour. That’s what campaign technology like Voter Gravity can do: make volunteers more efficient and effective by targeting the right voters so that more of the right work can be done in a shorter amount of time.