Voters. How fickle we are. What makes us support one person, and not another? Even more interesting, what makes us change support from one person to another?

Voter Gravity has now conducted two Iowa flash polls in 2015. Those polls exclusively consist of voters who have participated in every Republican primary and general election since 2008. These are definitely the most consistent Republican voters in Iowa, and while we can’t know all the reasons why these voters are shifting loyalties, they most certainly are.

In 2015, we have watched with great interest as Scott Walker led multiple polls, showing 18% support amongst Iowa Republican primary voters in May of 2015. In our latest Iowa flash poll the Monday after Cleveland’s debate, he was still strong in the field with 12% support, but obviously bled off some support to other candidates as they rose in prominence.

We all saw Trump rise in the national polls, and wondered if his style and approach could hold up with Republican primary voters with increasing media coverage and controversy. While we didn’t have Trump in our Iowa poll in May, his 12% showing in the post-debate poll seems to reflect a more hesitant Iowa base than what Trump receives in national polls.

When Carly Fiorina entered the presidential race, she didn’t have much national name ID. In the May Iowa poll Fiorina only had 4% support. But with a ton of earned media coverage, a great showing in the debate and social media buzz through the weekend, Fiorina ended up at 13% in the Monday post debate Iowa poll of the highest propensity Iowa Republicans. This was the greatest net change for any candidate in the poll.

Ben Carson topped the post-debate Iowa poll with 19%, but had already done very well in our May Iowa poll, earning 11% at that time. Based on the jump, it’s clear that Carson earned plenty of new supporters and built off the foundation he already had coming into the debate.

Maybe the most fascinating change from our May 2015 to August 2015 Iowa polls was those who supported someone not named. In May, a full 29% of Republican primary voters surveyed didn’t support one of the top tier candidates we included in the one question poll. But now with the same candidates (minus Paul and adding Trump), only 11% of respondents did not support someone in the top tier.

Rounding out our Iowa poll, Bush and Cruz picked up some supporters as Huckabee lost them, and Rubio was basically unchanged.

So what does all of this mean? It means that there is a long way to go and debates, stories and issues are definitely affecting Republican voters.

The only way to know which issues are really moving voters from one candidate to another is to  talk with them. There is nothing better than direct voter contact for the purpose of discussing issues and establishing relationships. When it all starts to blur together, what candidate will have sharpened their image with voters, clarified who they are, and earned the trust of their audience? It will be the candidate who can sincerely and honestly speak to the needs of the Republican primary voter.

Voter Gravity can help you engage in that conversation and learn what your audience needs as well. Sign up for a web demo of our system today. 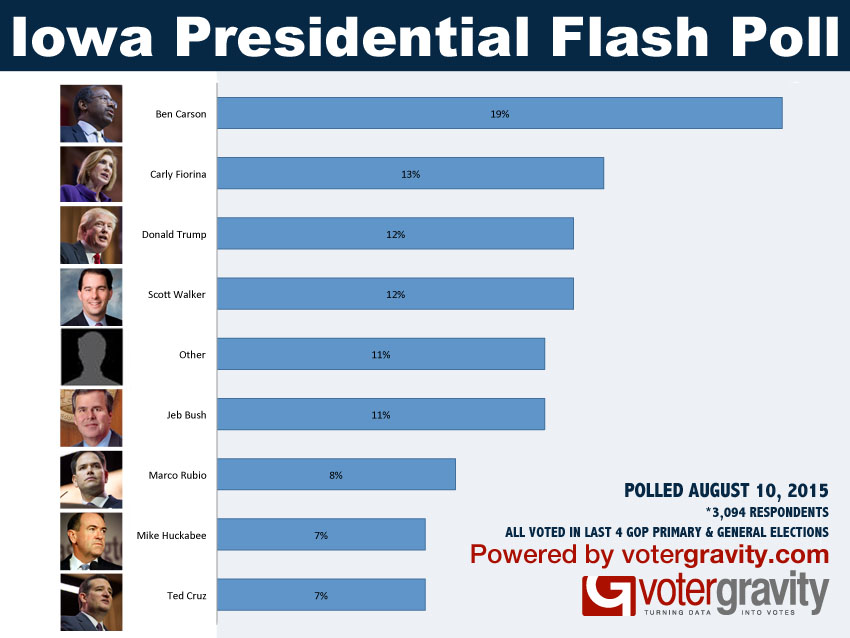